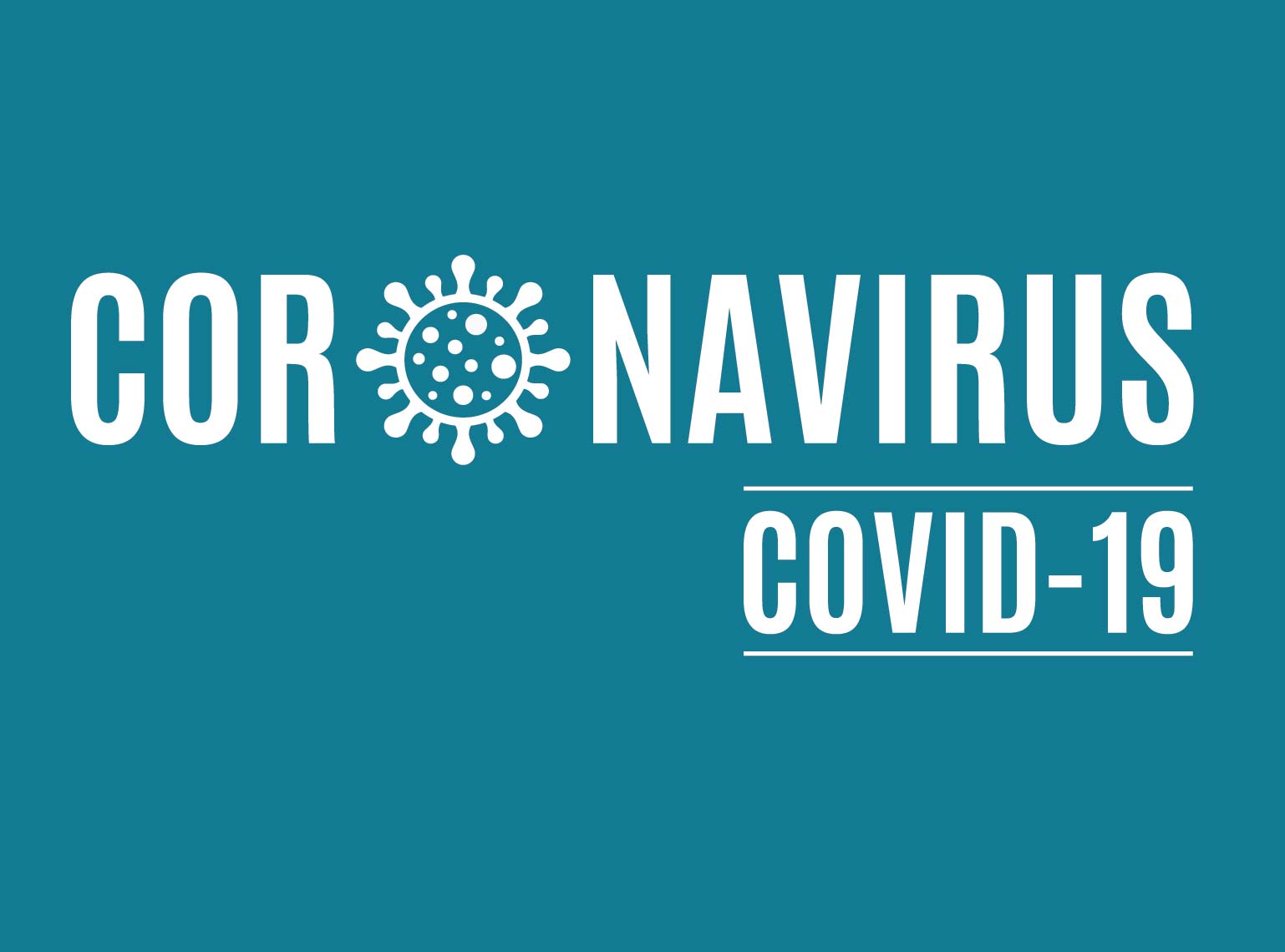 Measuring antibodies for the coronavirus which causes COVID-19 over six months in 2020 revealed the proportion of the population that had been infected. We are undertaking another blood sample collection 12 months later, in Winter 2021, to determine the persistence of antibodies over this time period. 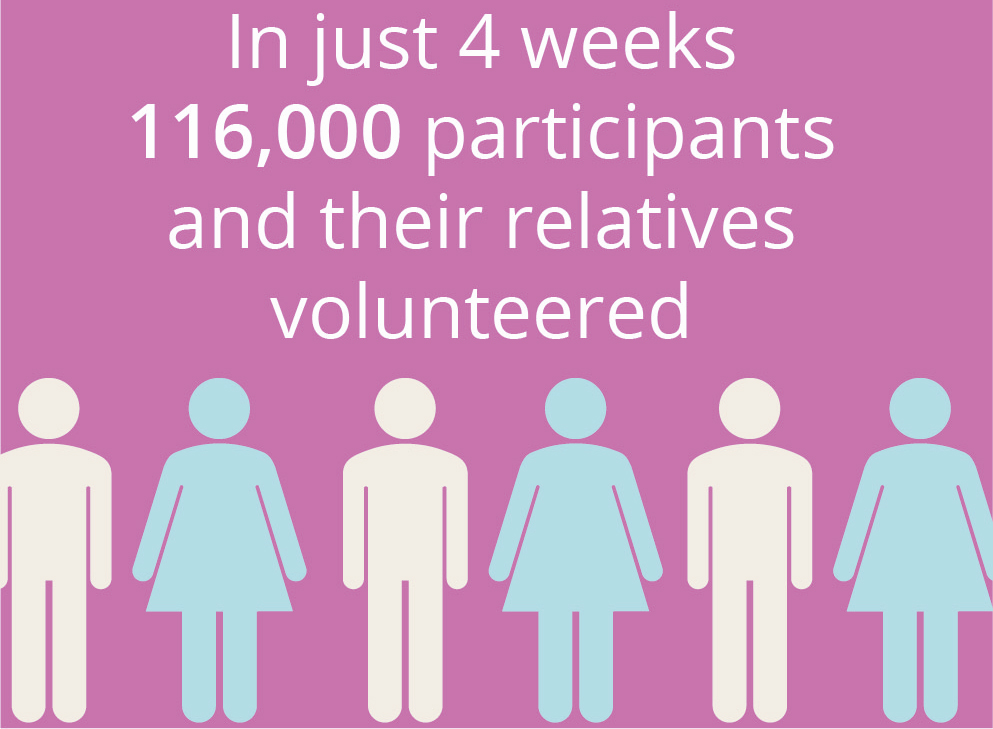 20,000 UK Biobank participants, their children and grandchildren (aged over 18) living in separate households, were selected to take part. 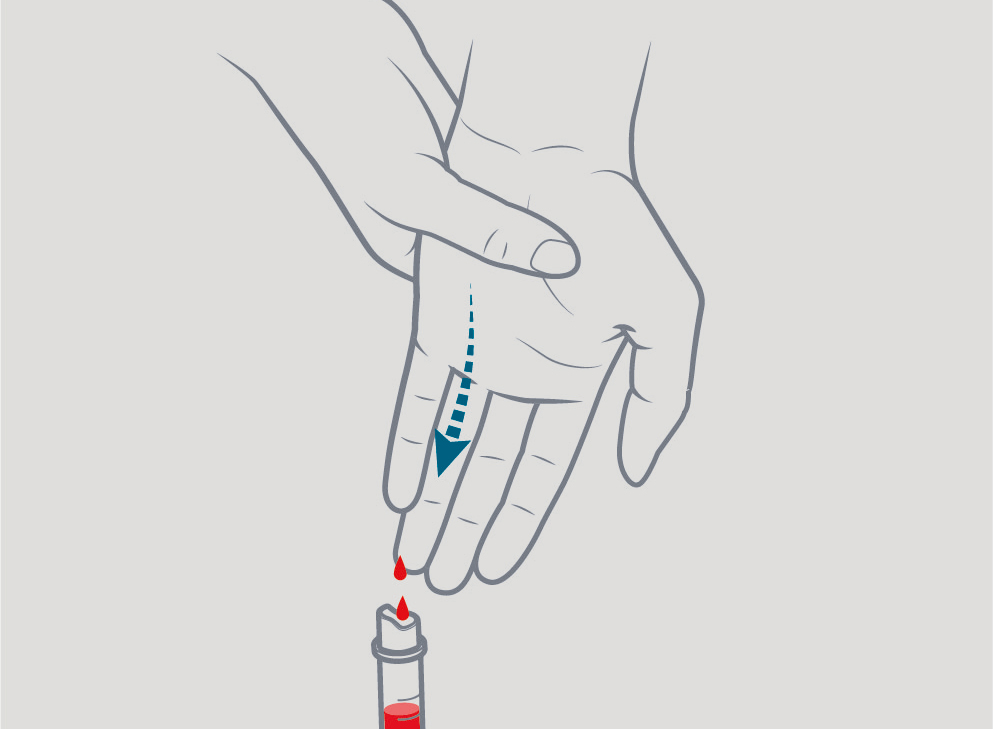 We collected and analysed blood samples and symptoms information from participants in this study and 90% of participants returned samples every month.

The 20,000 volunteers, a combination of existing UK Biobank participants and their children and grandchildren aged over 18, have helped to produce findings that are representative of the UK population.

One of the most significant findings of the study so far is that 99% of participants who had tested positive for previous infection retained antibodies to SARS-CoV-2 for 3 months after being infected, and 88% did so for the first 6 months of the study. This discovery provides an early indication that the antibodies produced following natural infection may protect most people against subsequent infection for at least 6 months.

Overall in the study, 6.6% of the participants had been infected previously in May/June 2020 and this rose to 8.8% by the end of November 2020. These rates did not differ in men and women. However the rates were higher in younger people, ranging from 13.5% in those under 30 to 6.7% in those over 70.

These data will be added to the UK Biobank database and research resource, enabling scientists globally to conduct further research into how SARS-CoV-2 infection affects health over the longer-term. You can find out more about these results by watching on-demand content for a participant event we held on 17th February 2021. Please follow this link.

We asked all participants in this original study to provide another blood sample for testing for antibodies to SARS-CoV-2, approximately 12 months after the last sample collection, in order to determine the persistence of antibodies over this time period. The results will be made available to approved researchers.

Thank you to everyone taking part.

Find out more about the current sample collection. 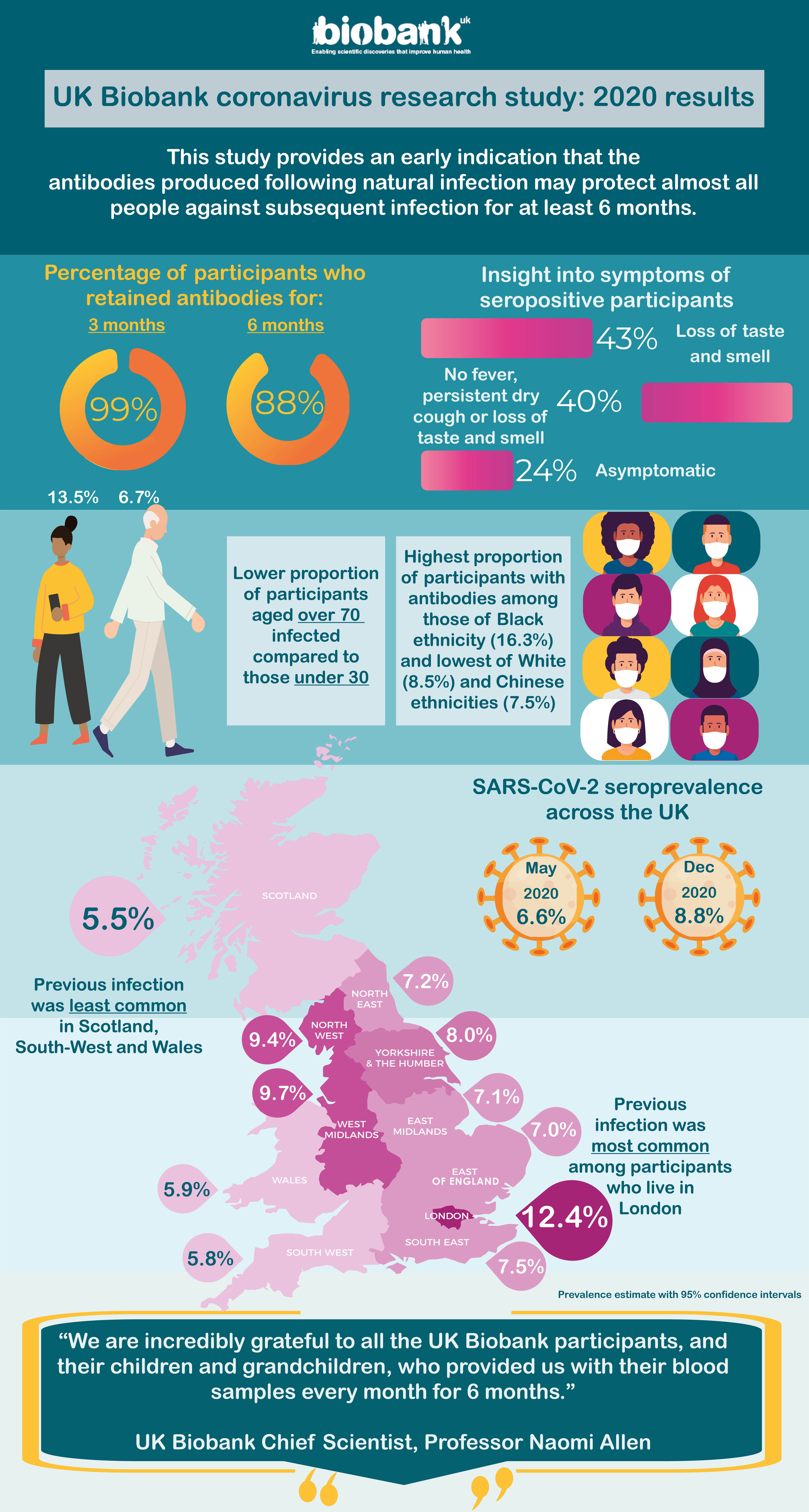 Thank you to the 88,000 participants and their 15,000 family members who volunteered for the study to test antibodies. We were over-whelmed by the response and sorry that we could not include everybody – but your support at this time of crisis is very much appreciated

We invited all UK Biobank participants to help us undertake urgent research on the SARS-CoV-2 virus that causes COVID-19 by taking part in a self-test antibody study, which took place from February to July 2021.

The study involved doing a simple antibody test, the AbC-19TM Rapid Test or the Fortress Fast COVID-19 Home Test, which showed participants if it was likely that they had been exposed to the coronavirus that causes COVID-19. Participants supplied their results to UK Biobank via our participant website. If participants reported a positive test result and had not had a SARS-CoV-2 vaccine, they were sent a second test to check their result.

Nearly 192,000 participants returned an antibody test result. These findings have been uploaded to our database and will enable researchers to undertake large-scale research into the short- and long-term health impacts of SARS-CoV-2 infection 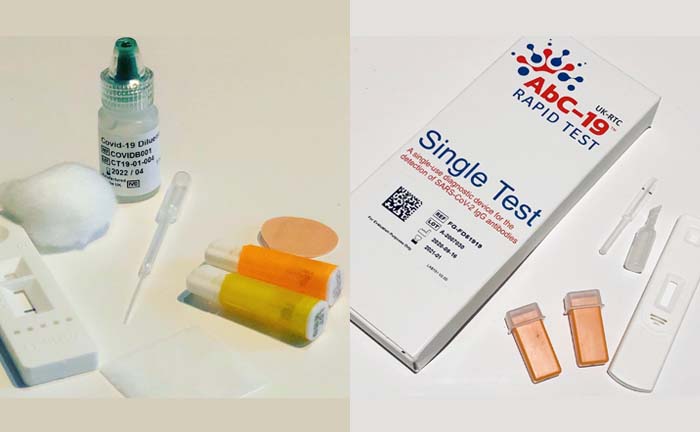 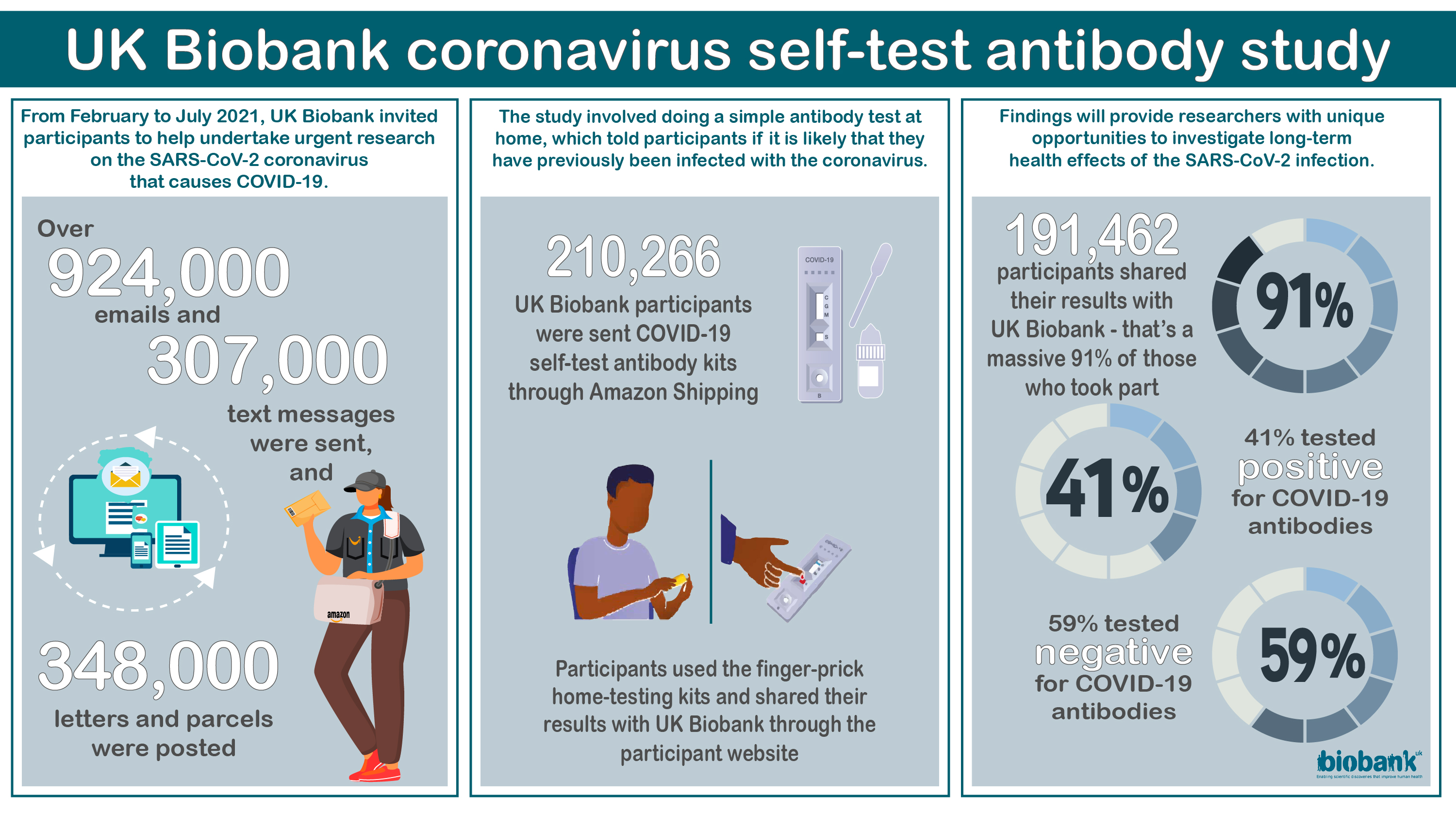 In June we invited some UK Biobank participants who took part in our recent self-test coronavirus antibody study to take part in an important follow-up study. We wanted to know whether vaccinated participants who tested ‘positive’ for antibodies to SARS-CoV-2 using a lateral flow device developed these antibodies as a result of having been infected with SARS-CoV-2 (rather than as a result of having been vaccinated).

Participants who signed up to take part were sent a blood sampling kit and asked to return it for analysis in a laboratory. Participants then received their antibody test result by email. Nearly 62,000 participants took part and received a result.

Combined with the existing genetic and lifestyle data held by UK Biobank, and regular updates of health outcomes that we receive for UK Biobank participants with their consent, having objective data on evidence of previous infection with SARS-CoV-2 will enable scientists to perform robust longitudinal research into the longer-term health effects of SARS-CoV-2 infection across the full spectrum of disease severity.

The UK Biobank COVID-19 repeat imaging study scanned more than 2,000 people during 2021. Thanks to your help, we collected imaging scans from about 50,000 participants before the COVID-19 pandemic occurred. We received a 58% response rate from participants who had COVID-19 and a 57% response rate from participants who have not been infected but were still similar in age, sex and ethnic group. Collecting a second set of imaging scans from some people who had been infected with SARS-CoV-2 and from others who had not been infected has generated a unique resource to enable scientists to understand how the virus affects internal organs.

Participants' generosity will be repaid many times over by the research community in the months and years ahead, as we learn more about the impact of the devastating coronavirus illness on different people, and how to treat it.

Crucial data on the health of 500,000 UK Biobank participants are being made available on a regular basis to registered researchers worldwide to undertake vital research into the genetic and lifestyle determinants of COVID-19 and its long-term health consequences.

Data from the following health records are available:

We also plan to make critical care data available as soon as we can.

Visit the COVID-19 pages in our Data Showcase

Over 740 research groups have accessed the COVID-19 data, publishing over 148 papers in the public domain

Shift work is associated with increased risk of COVID‐19: Findings from the UK Biobank cohort

BMI and future risk for COVID-19 infection and death across sex, age and ethnicity: Preliminary findings from UK biobank