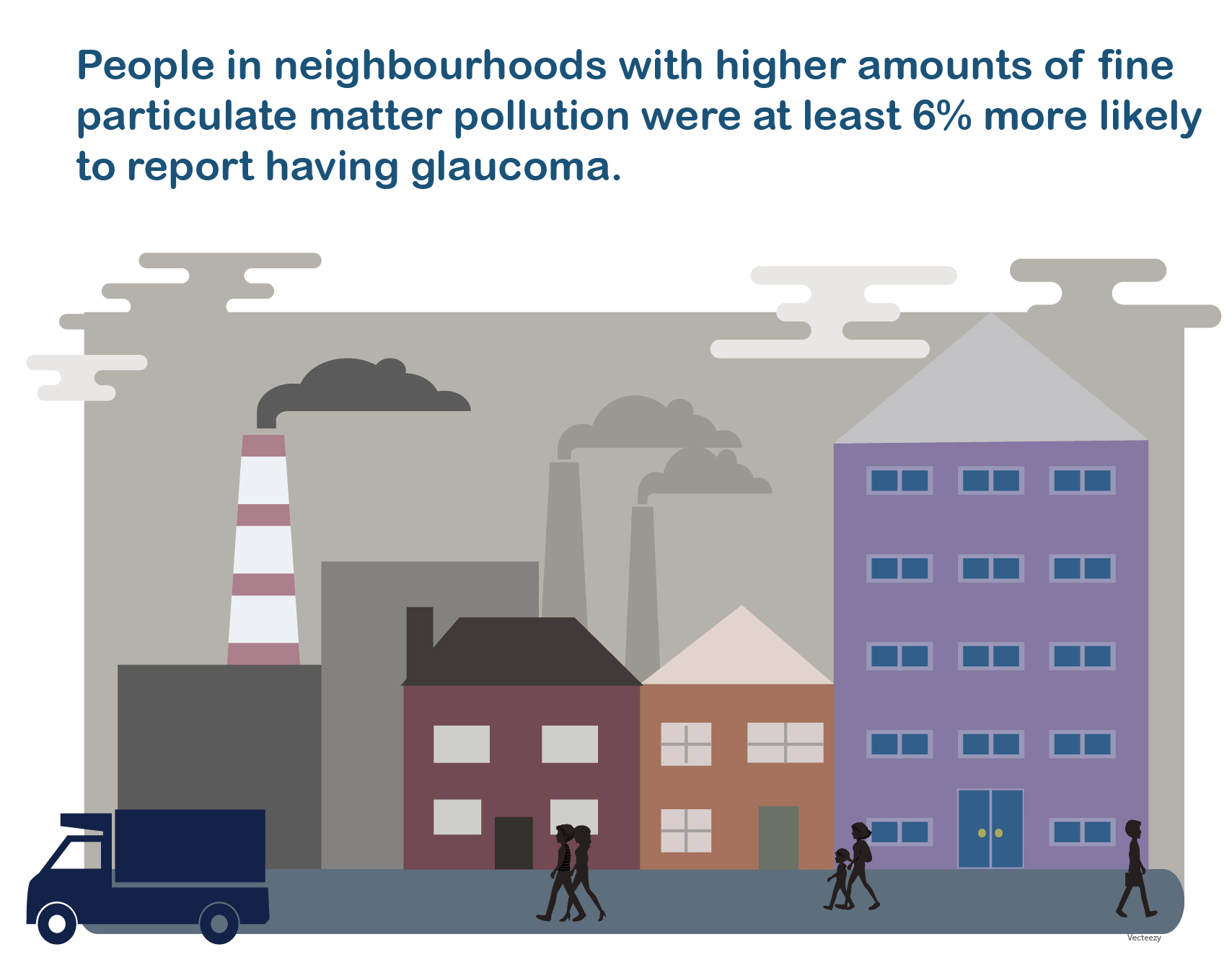 Glaucoma is the leading global cause of irreversible blindness and affects over 60 million people worldwide. It most commonly results from a build-up of pressure from fluid in the eye, causing damage to the optic nerve that connects the eye to the brain.

The findings were based on 111,370 UK Biobank participants, who underwent eye tests from 2006 to 2010 at assessment centres across Britain. Participants were asked whether they had glaucoma, and underwent ocular testing to measure intraocular pressure, and a laser scan of the retina to measure thickness of the central area of the retina.

Eye data was linked to air pollution measures for their home addresses, from the Small Area Health Statistics Unit, with the researchers focusing on fine particulate matter (equal or less than 2.5 micrometres in diameter, or PM2.5). Some examples of fine particulate matter include dust, ash and soot, like the soot emitted during the combustion of solid and liquid fuels, such as domestic heating and from vehicle engines.

The research team found that people in the most-polluted 25% of areas were 18% more likely to report having glaucoma than those in the least-polluted quartile. They were also significantly more likely to have a thinner retina, one of the changes typical of glaucoma progression. Eye pressure was not associated with air pollution, which the researchers say suggests that air pollution may affect glaucoma risk through a different mechanism.

"“Air pollution may be contributing to glaucoma due to the constriction of blood vessels, which ties into air pollution’s links to an increased risk of heart problems. Another possibility is that particulates may have a direct toxic effect damaging the nervous system and contributing to inflammation,”"

Air pollution has been implicated in increased risk of pulmonary and cardiovascular disease as well as brain conditions such as Alzheimer’s disease, Parkinson’s disease and stroke. Particulate matter exposure is one of the strongest predictors of mortality among air pollutants.

This study adds to previous evidence that people in urban areas are 50% more likely to have glaucoma than those in rural areas, suggesting now that air pollution may be a key contributor to that pattern.

"“Most risk factors for glaucoma are out of our control, such as older age or genetics. It’s promising that we may have now identified a second risk factor for glaucoma, after eye pressure, that can be modified by lifestyle, treatment or policy changes,”"