Growth hormone IGF-1 is a likely cause of breast cancer

Growth hormone IGF-1 is a likely cause of breast cancer 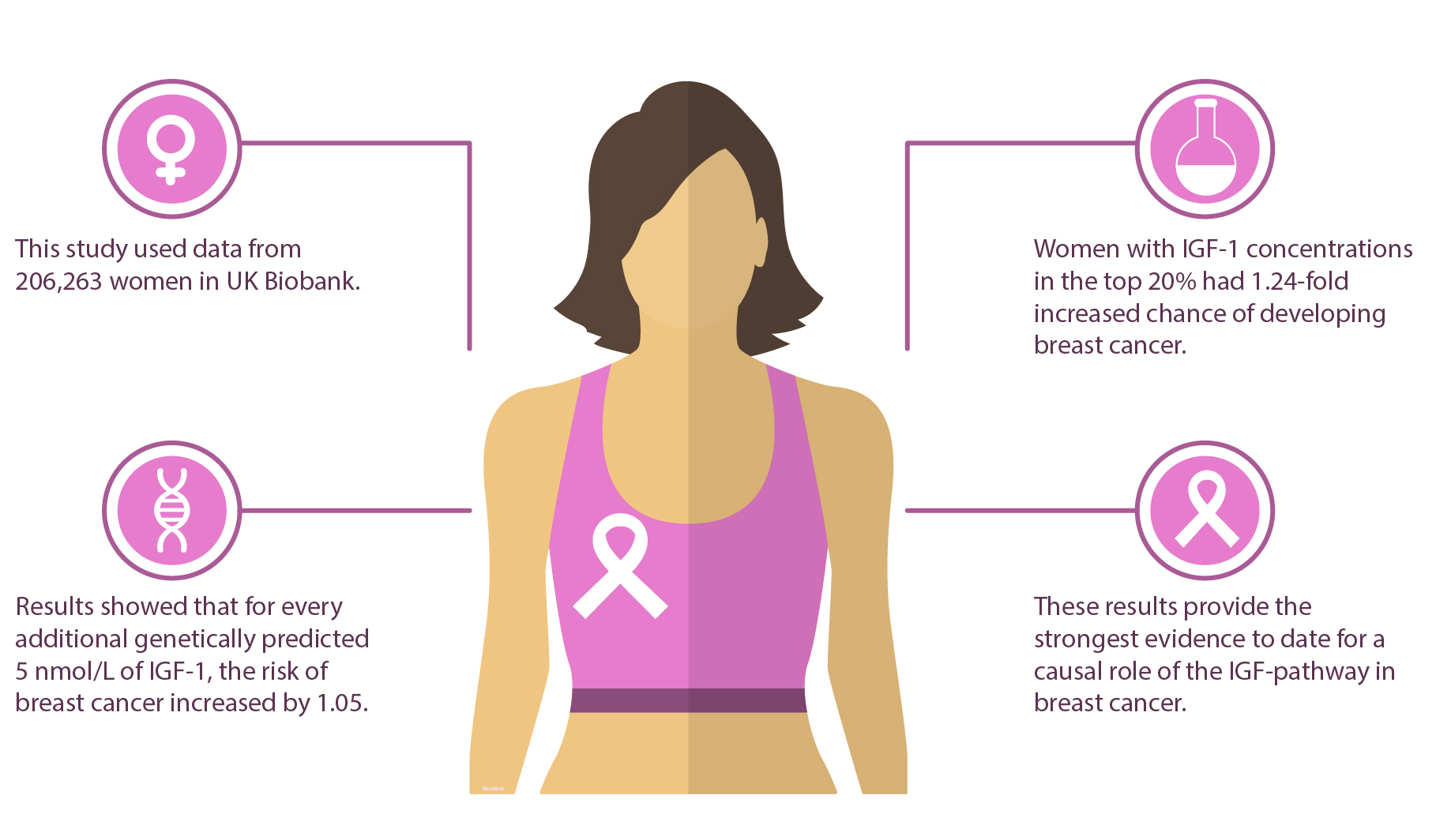 Analysis of several hundred thousand women in UK Biobank has shown for the first time that higher levels of a growth hormone called IGF-1 (insulin-like growth hormone factor-1) circulating in the blood is not only associated with the development of breast cancer, but is also likely to be a cause of the disease.

Researchers from the International Agency for Research on Cancer (IARC) in France, and the Cancer Epidemiology Unit at the University of Oxford, carried out two, complementary studies to investigate the role of IGF-1 in breast cancer development. The first looked at the associations between levels of IGF-1 in the blood and the chances of the disease developing in 206,263 female UK Biobank participants.

During an average of seven years of follow-up, 4,360 cases of breast cancer occurred. Among the 206,263 women included in the observational analysis, levels of IGF-1 ranged between an average of around 14 nanomoles per litre of blood (nmol/L) among participants with levels in the lowest 20% and 29 nmol/L in the top 20%.

They found that women with IGF-1 concentrations in the top 20% had 1.24-fold increased chance of developing breast cancer compared to those in the bottom 20%, after adjustments for various factors that could affect the results, such as age, body mass index, health behaviours, educational level and concentrations of other hormones and proteins in the blood.

The second study analysed genetic data looking at 265 specific genetic variants known to be associated with IGF-1 concentrations in 122,977 cases of breast cancer and 105,974 women without cancer. Researchers also looked at four genetic variants for a specific binding-protein for IGF-1, which may modify the availability of the growth hormone IGF-1.

This analysis was able to provide evidence for cause and effect through use of a complex statistical analysis known as Mendelian randomisation. This allowed researchers to see whether participants with a different genetic make-up had a different risk of breast cancer.

Results showed that for every additional genetically predicted 5 nmol/L of IGF-1, the risk of breast cancer increased by 1.05. When the researchers looked at oestrogen receptor positive (ER+) [1] and negative (ER-) breast cancers separately they found that IGF-1 was only associated with an increased risk of ER+ breast cancer.

"To our knowledge, this is largest single study and the first Mendelian randomisation study to examine the relationship between IGF-1 and breast cancer. Importantly, our Mendelian randomisation analyses yielded strikingly similar positive associations between IGF-1 and breast cancer as those found in our observational analyses. Taken together, these results provide the strongest evidence to date for a causal role of the IGF-pathway in breast cancer development, and suggest that altering IGF-1 levels through diet and lifestyle or pharmacological means may be an effective strategy in the primary prevention of breast cancer. Our next step is to gain a fuller understanding of which lifestyle practices can alter IGF-1 concentrations and, in turn, the chances of breast cancer developing."

Dr Marc Gunter, scientist and head of the nutrition and metabolism section at IARC